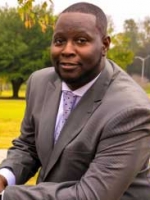 Pastor H. Calvin Arline IV, a man of Vision, Purpose, and Prayer, is in pursuit of excellence in Christian ministry while fulfilling the call of God by proclaiming the uncompromising Word and leading His people. The Macon, Georgia native is committed to presenting the Gospel of Jesus Christ to all people regardless of ethnicity, nationality, or creed.

Before accepting the call to pastor in August 2001, he contributed his musical expertise to several ministries across the state of Georgia. “A preacher who is gifted to sing and play,” Arline’s ministry began as a musician and choir director.

Pastor Arline’s formal training began in January 2006 at Beulah Heights Bible College in Atlanta, Georgia. His focus was both in Biblical Studies and Leadership Administration. In 2010, Pastor Arline, founded Love in Action Evangelistic Ministries, a community-based outreach and teaching ministry. Love in Action laid the foundation and served as the springboard for what would become a ministry with a heart for the community.

In February 2011, Pastor Arline founded The Abundant Word of Grace Church of God in Christ (AWOG) in Macon, Georgia. The ministry has grown significantly since its inception and continues to develop dedicated disciples using proven Kingdom principles. Pastor Arline and the AWOG congregation have been instrumental in providing outreach programs to support the community holistically using their “God-given” resources and abilities to assist those who are often considered least, last, and lost.

Pastor Arline has been married to Lady Shana Arline for over twenty years. They are the proud parents of six children: Tiana, Brian, India, Ceniah, McKenzie and Harmonie. Your generosity makes a difference!Give Online

About Abundant Word of Grace

At Abundant Word of Grace or AWOG as we call ourselves, it's our hope and prayer that you will experience a loving environment. As recipients of God's unmerited grace and mercy, we look forward to extending the same to our community.